Dr. David Gray, son of Pat and Gary Gray, graduated from Philomath HS in 1985 and completed a bachelor’s degree in Animal Science from Oregon State University in 1991. David graduated from Oregon State/Washington State Colleges of Veterinary Medicine in 1994. After receiving his DVM degree, Dr. Gray worked as an associate veterinarian in the Albany area but soon joined the Army Veterinary Corps and served for three years. During this time, he was stationed at Fort Lewis, Guantanamo Bay, and in Japan. After his army commitment, Dr. Gray practiced both routine and emergency medicine while living in Sacramento as well as in Idaho where he lived for 5 years. After almost a decade of both owning and operating critical care facilities, he eventually chose to move back home to Albany and open River’s Edge Pet Medical Center.

Dr. Gray is a member of the Veterinary Emergency and Critical Care Society and the American Veterinary Medical Association. His professional interests include animal emergency medicine, preventive health and working with clients to choose the best, most affordable medicine for their pets. His personal time is best spent with his children, cutting wood for donation thru LOVE INC of Linn County to families in need, or out on the golf course perfecting his swing.

Dr. Leah Gray completed a bachelor’s degree in Biology from Western Oregon State College in 1993. Leah graduated from Oregon State/Washington State Colleges of Veterinary Medicine in 1997. After receiving her DVM degree, Leah completed an internship in equine medicine and surgery at Tacoma Equine Hospital in Tacoma, WA. Leah was accepted to an equine internal medicine residency at the University of California at Davis, she was classically trained in equine internal medicine and completed her board certification in May 2001 (DACVIM, 2001). Most recently she studied, practiced, and became certified in Veterinary Acupuncture; Equine Emphasis, from the College of Integrative Veterinary Therapies located in Australia.

She is a member of the American Association of Equine Practitioners, the American College of Veterinary Internal Medicine, and the American Veterinary Medical Association. Dr. Leah practices nearly exclusively on horses out at the farm or at our equine facility in North Albany on Palestine Ave. Her interests include neonatal and critical care. 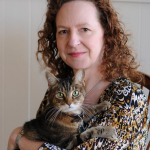 Dr. Bridget Hayes graduated with honors from the University of Illinois College of Veterinary Medicine in 1991. She has practiced in Illinois, Indiana, Colorado and Georgia before moving to Oregon. She moved here from Atlanta, where she worked at Ansley Animal Clinic for 18 years.

She has a special interest in feline medicine, and is a member of the American Association of Feline Practitioners. “I have been a crazy cat lady since I was in diapers. My first word was “Calico” according to my mother.”

She and her husband prefer the small town lifestyle of the Willamette Valley to the big city. In her off time, she enjoys cooking, cycling, gardening, birding, origami and spending time in the great outdoors. 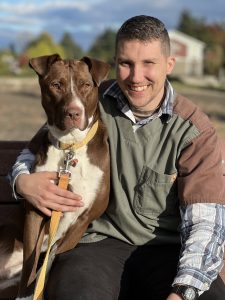 with his bachelor’s in Animal Science in 2015.  After graduation, Dr. Gibson started volunteering as a Sunday school teacher back home in California.   A few years later (2017), he was blessed with the opportunity to travel overseas for a mission trip. Invigorated when he returned back to the United States, he was accepted at Ross University School of Veterinary Medicine in St. Kitts, West Indies, located in the eastern Caribbean. Whew! What a busy year of life!

After spending 3 years studying at Ross University School of Veterinary Medicine, he returned back stateside to finish his fourth (and final year) of his veterinary education at Oregon State University (Corvallis, Oregon).  Dr. Gibson graduated with his Doctorate of Veterinary Medicine and has joined our community along with his wife, Shannon and their exuberant young dog, Astro.

In his spare time, Dr. Gibson is family-oriented and involved with his church and helping out in the community. His passions include weightlifting, golfing, hunting, fishing, and playing tennis.